Captain David Williams, 47, was piloting a Virgin Atlantic Boeing 747 from Gatwick to Las Vegas on December 30 when a fault was detected in the landing gear soon after take-off. 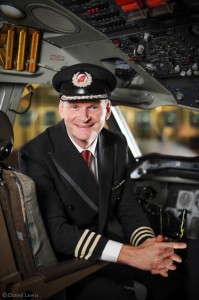 For three hours he circled southern England to burn off fuel before carrying out a text- book landing back at Gatwick where emergency services had been scrambled. The father of three was accompanied on the flight by his 12 year old daughter.

David , originally from Ffawyddog, in Powys, Wales, was a pupil at Shebbear from 1979 to 1985.
His leaving notes in the Shebbearian show that he played a very full part in Shebbear life.
Among many achievements, academic , social and sporting, he was captain of the squash team and Victor Ludorum in the house swimming competition.

Speaking after the incident, he said: All our pilots at Virgin Atlantic are trained to the highest standards and we go through regular testing to deal with any scenario that might arise.

“Clearly this was an out-of-the-ordinary landing but I was just doing my job and any one of our pilots would have taken the same actions. I’m really proud of my colleagues on the ground and in the air and the support they gave me during this event.”

Neighbours in his home village of Loxwood, Sussex, described him as a “cool and calm individual, quiet and unassuming , who would not want a big fuss.”

They said he and his wife were both church-goers and he was a governor at the local school.
He was said to have had at least 20 years’ flying experience and had previously flown for Monarch Airlines from 1994 to 1998.

He has raised more than £3,000 for charities such as thy Down’s Syndrome Association on sponsored bike rides, including from Land’s End to John O’Groats and from Boston to New York.

David is not the only old Shebbearian to have flown with Virgin. The late Paddy Hipperson, a sporting icon at Shebbear in the late 1940s/early 1950s was also a pilot with the airline.