On Saturday 5th September an OSA rugby side will take on a team from Grenville Old Boys at Shebbear. Kick off is 11am.

This will be followed by the College 1st XV playing Bideford Colts at Bideford Rugby Club as part of the annual sponsored day.

Refreshments will be available at both the college and at the rugby club.

Full details of all Old Shebbearian events can be found in the events diary.

There was a smaller turnout for the Annual Dinner this year, with just 74 attending what was still a most enjoyable evening at the R.A.F. Club. The meal and the service provided were of the usual high standard throughout the evening and it was particularly pleasing to see at least half a dozen recent Head Boys in attendance.

The President, Michael Tucker, spoke of his time as a boarder at Shebbear, in what were far more spartan conditions than exist nowadays. He also commented on how much he had enjoyed his time in office, affording him the opportunity to visit the college on a number of occasions which included the Rounsfell Dinner, Speech Day and the OSA cricket match.

Simon Weale then gave a highly entertaining report on the school – mentioning the fact that the college had so far resisted the instalment of wind turbines, but had welcomed the arrival of both the biomass plants and solar panels, which were already helping to cut energy costs considerably. He also commented on the strength and importance of sport at Shebbear, and in particular the girls’ sport – quite appropriately, given that the guest this year was, Serena Ham, the Head of Girls’ Games.

Head Boy, George Daniel, and Head Girl, Katie Trask then spoke eloquently, reiterating the headmaster’s comments about the thriving sport at the college and recognising the importance of occasions such as the Reunion Dinner.

It was then the time for Michael Tucker to hand over the President’s chain of office to Andrew Friend, who received it gladly and said how much he was looking forward to the year ahead, in which he hoped to further develop the links between the OSA and the college.

After dinner, it was good to see so many retiring to the bar to continue their conversations and catch up with old friends.

Captain David Williams, 47, was piloting a Virgin Atlantic Boeing 747 from Gatwick to Las Vegas on December 30 when a fault was detected in the landing gear soon after take-off. END_OF_DOCUMENT_TOKEN_TO_BE_REPLACED

The 1st XI were put in to bat by the OSA skipper, Richard Tidball, in this 30-overs-a-side match and were given a flying start by Shian Braithwaite (30) before he was well caught at mid-off giving Harry Landymore, the youngest member of the OSA side, a well-deserved wicket. Things slowed down after Braithwaite’s dismissal and wickets fell regularly, but Maxwell Lewis batted sensibly to help take the score to a very respectable 177-6, thanks also to a whirlwind innings of 32 from Jack Warren, which included three huge sixes.

END_OF_DOCUMENT_TOKEN_TO_BE_REPLACED

The 106th Reunion Dinner proved to be a fantastic success as 118 Old Shebbearians and guests enjoyed an evening of good food, excellent speeches and lively conversation.

This was the first dinner attended by the new headmaster, Simon Weale with his wife Rebecca, and his amusing speech, tempered with some serious points about the future role of the OSA, clearly made a favourable impression on all those from a range of Shebbearian generations.

James Hancock, the outgoing President, spoke of the honour he felt at having been able to hold the position and said that he had thoroughly enjoyed his year which had enabled him to return to college on a number of occasions for a variety of events.

Michael Tucker then took the chair as the incoming President and said that he too was looking forward to his time in office.

As well as the head boy, Julius Gemmel, and head girl, Ellen Chamberlain, Matt Newitt (Head of 6th Form) and Karen Purdew were the guests and they said how much they enjoyed the occasion, catching up with some they had taught, as well as meeting others who had attended the college long before they arrived as teachers.

It was particularly pleasing to see so many relatively recent leavers at the dinner and a healthy number of female Shebbearians amongst them. 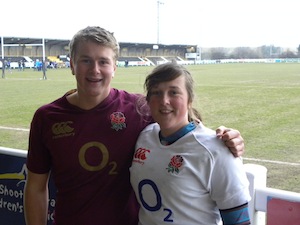 Clara Nielson, Head Girl at Shebbear College in 2010-11, has seen her rugby career flourish since taking up her place at Exeter University.

Having been involved with the England U18 and U20 squads for several years, she was finally given her first cap this year when she came on in the second half for England U20s against France at Esher.

Following this, she then helped Exeter University Women’s team to reach the final of the Universities’ cup, where they beat Cardiff Met. 17-15 in a thrilling encounter at Twickenham.

More than 80 Old Shebbearians attended this year’s dinner at the RAF Club where, as well as being served an excellent meal, they took the opportunity to catch up with old friends.

The President, Lester Bird, spoke of the success of the various events of the year, particularly the Michaelmas Ball in September which saw 350 parents, staff and old Shebbearians gather under canvas for a splendid night of music, food and drink. He then thanked Bob Barnes for his tremendous service to the college and there followed the first of numerous standing ovations for the headmaster. 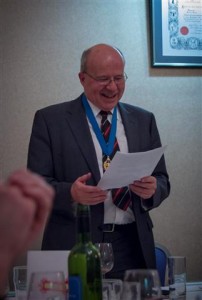 Bob Barnes then reported on another very successful year for the college, both academically and in extra-curricular activities and said he was grateful for the continued support of the association.

The officers were duly elected and Mark Creedy, a former President, was elected to replace the retiring David Shorney as treasurer of the War Memorial Trust Fund. Mark thanked David for his outstanding work over a number of years in building up the Fund to its present state.

James Hancock, the incoming President, and Mike Tucker, Vice President, spoke briefly of the honour of being elected and assured those present that they would do their job to the best of their ability. James added his thanks to Lester for his hard work on organizing such a successful event and said that he hoped to be able to continue forging stronger links between the college and the association.